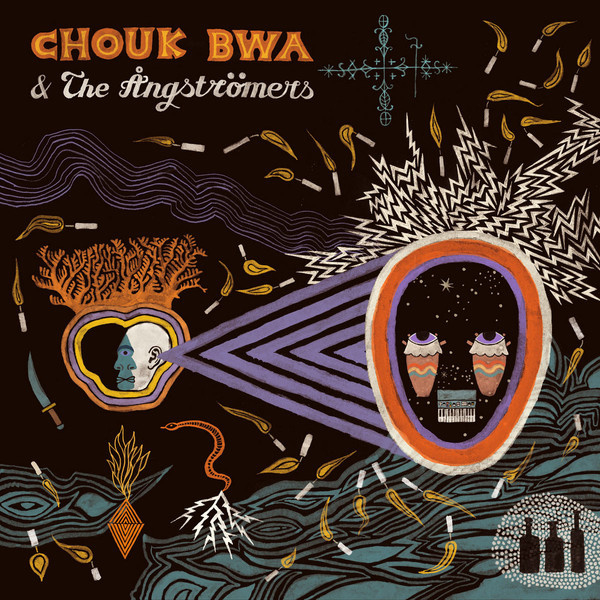 Chouk Bwa play traditional Haitian music; they would fit in the “Mizik Rasin” genre, alongside bands like Boukman Eksperyans, Boukan Ginen or Rasin Mapou from Azor. However, until their decisive encounter with The Angströmers, their most characteristic feature was their loyalty to the essential elements of Voodoo - therefore without any instrumental addition.

Chouk Bwa’s music combines multiple characteristic Voodoo elements: rhythms, dances and chants. These are the roots, removed from Africa and secretly replanted in a new earth. The percussionists, going from one rhythm (and therefore one cultural reference) to another, act as collective memory smugglers, and their instruments are the material demonstration of this diversity. The dance is neither aesthetic nor premeditated, it is real; it is not about a “show” or a “choregraphy” but rather about a connexion with the drums’ spirits. On top of this, the singer’s voice ascends effortlessly above the instrumentation, which also includes bamboos and lanbi.

The Angströmers, an electronic music duo consisting of Nicolas Esterle and Frédéric Alstadt, constitute one of the artistic emanations of the label The Angströmers.

Founded in Toulouse in 1998, the label organizes events, co-produces cine-concerts with the Toulouse film library and produces one or two albums per year. In 2007 the structure is refounded in Belgium, and starts concentrating its activity on the mastering studio and the label. Following the premature death of one of the founding members near the end of 2008, the label is put on standby, and only a few albums continue to get released episodically. The studio becomes a well-known actor of the alternative Belgian scene, specialized in vinyl mastering.

As musicians, certainly fed by their engagement in the label and the mastering, The Angströmers spread their music full of bass and echos, influenced by dub and drone music, all over the underground European stages. All along their encounter with the voodoo culture, they learn to expand their sound by immersing themselves into complex polyrhythms. They develop an electronic psychedelic music, free of all the codes of binary, 4/4 standards that dominate the club world.