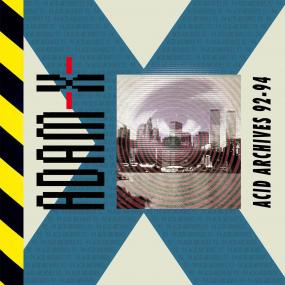 Trends come and go as we have seen, unlike many, Brooklyn-born Adam X isn't one to follow trends, but rather set them. Now entering his 30th year of DJing and 25th year running his Sonic Groove label much of the world of dance music has come full circle since Adam started back in 1990. With that said there was no better time to explore his vast back catalog then the present as it's all the more relevant right now.

As many younger contemporary techno djs have taken to the faster, harder, stronger route as of late, this was par for the course back in 1992, where this compilation begins. What we have here is a collection of formative psychedelic acid tracks specifically made for the raves that were happening all over the world at the time.
Many of the tracks here had previously appeared on cutting edge labels such as Direct Drive, Drop Bass Network and Magnetic North, who were all spearheading the sound at the time, we also get two unreleased cuts from the vaults, plus a rare collab with Thomas Heckmann.
Back then the goal was simple- to push the limits of this fresh sound, and see how far they could actually go with their 303s; this music now filling warehouses and clubs worldwide. The eleven tracks on this record undoubtedly take rave-extremity to new heights whilst keeping the integrity (and brutality) of the music intact and the crowd in a frenzy.

Guaranteed to destroy the club as much now as they did in back 1992.